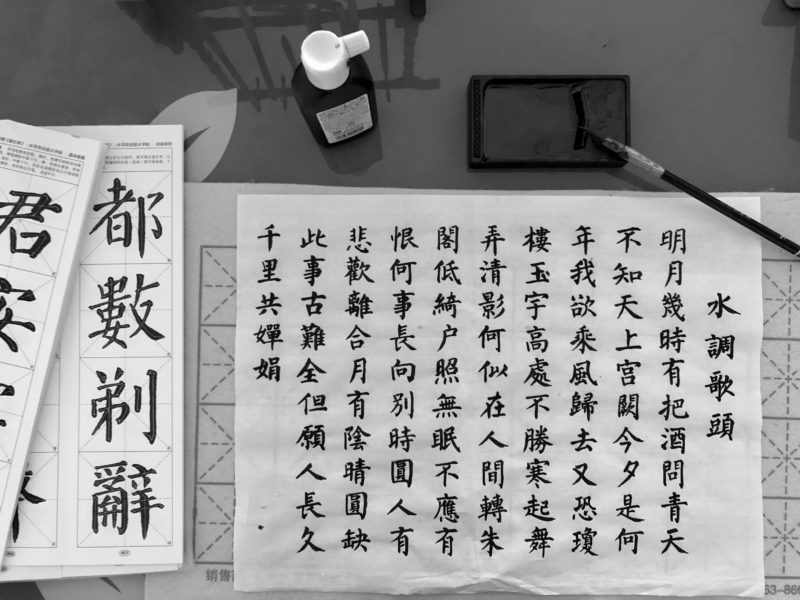 Nervous about learning Chinese? Feeling overwhelmed? It’s not uncommon. There’s a reason why the FSL labeled it a Class 5 language, stating that it takes roughly 2200 hours or 88 weeks to learn. The main reason for that? The Chinese “alphabet”. Chinese words are made up of characters. Thousands of them. And those characters are made up of radicals. if you’re going to reach fluency, you need to learn Chinese radicals. Here’s the fastest way to make that happen. 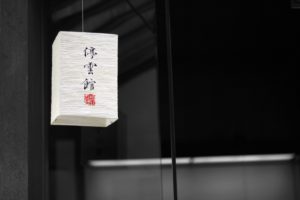 How Many Chinese Radicals Are There?

If you’re feeling intimidated at the prospect of learning Chinese, don’t be. Relax. Even though there are hundreds-of-thousands of characters, you don’t need to memorize them all. To read a newspaper, you need to learn 3,500 Chinese characters (according to the PRC). If fact, if you know that many, you’ll know about 99% of the language.

3,500 may still seem like a lot. Luckily, there’s an easy tool you can use to break down this number into a little over 200: Radicals. By learning the radicals, you’ll know the building blocks that make up the majority of the Chinese language. And from there, it only gets easier.

But before we get into radicals, we need to take a step back and look at how language changes over time. Trust me, it’ll help you understand (and remember) the definition of radicals in the end.

How Chinese Words Change Over Time

English is plagued with words and pronunciations that make us scratch our heads. Why does “knife” have a k? How can you tell throw, through, thorough, and thought apart? The truth is every language has these idiosyncrasies. And the reason for them is a mixture of culture and phonetic drift.

Language reflects culture. So, it shouldn’t be a surprise that it also has an impact on how we pronounce words. English, for instance, fused with French for nearly 200 years* after the invasion of Normandy.

Words are also organic, they change through time. The term “phonetic shift” describes a movement away from how we pronounce certain sounds. A great example of this is the difference between French spelling and pronunciation. And as it turns out, Chinese isn’t immune to this either.

Understanding how sounds change over time is key if you want to learn how to read in Chinese. 日 (rì) means sun in Chinese writing. But before that, sun used to be represented as a circle with a dot in the middle of it. And even that form changed more over time. To get a better look at that, we need to talk about the history of Chinese characters. Briefly, of course.

The Chinese writing system is old. In fact, it’s one of the oldest languages still in use today, going back some 4000 years. As mentioned before, it consists of between 20,000 – 100,000 logograms (depending on who you ask) that use pictures to convey meaning. A modern dictionary will have around 20,000 characters while the Dictionary of Chinese Variant Form has over 106,000 of them.

Oracle Bone Script, as it’s known, came from carving out words into bones and turtle shells. And this ancient form of writing stood out from the world’s alphabet-based languages. The end result was a logographic system that used thousands of characters to represent morphemes and words. The writing system itself, while obscure in its origins, was already very well developed by 1500 BCE. 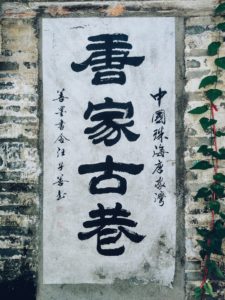 Keep this in mind when reviewing the chart below. In some of the characters below, it is easy to see the meaning’s reflection. However, that’s not always the case. Some Chinese radicals only slightly resemble their meaning. And yet with others, there is no resemblance at all.

It’s also important to note that characters are not synonymous with words in Chinese. Some characters can function on their own as words. Others need to be combined with 1, 2, or 3 more characters to create a word. Again, some of these will make sense, others will require memorization.

Still, as ideas increase in complexity overtime, more and more complex characters need to come together to communicate these. What makes this process confusing, however, is when you run into identical characters. Something is then needed to differentiate them. And that’s where learning Chinese radicals come into play.

Radicals (also known as determinatives) make up every single Chinese character. By themselves, most don’t mean anything. But when you add them together, they create characters. By breaking a character down into radicals, you can better understand the idea the ideogram creates without confusion.

In other words, radicals are hints that help readers figure out the meaning behind the character. And they make it easier to look up the words in dictionaries. However, these days, you can look up the character by simply writing it out and using your phone or tablet, then using an app like Pleco.

Keep in mind too, that like any language, there’s going to be outliers that simply don’t follow the rules. And for those, you’ll have to memorize them.

How to Locate Chinese Radicals

Every radical has a “key” function. This allows you to look it up in the dictionary. If you’re looking to define a word, you can typically find the radicals on the left or top of the characters:

But that doesn’t mean that’s the only place they go. You can also find the radicals on the right: 制 (zhì — system) would be 刂, or on the bottom: 虫 for 蛋 (dàn — egg) . Sometimes, the radicals are even inside the enclosure. 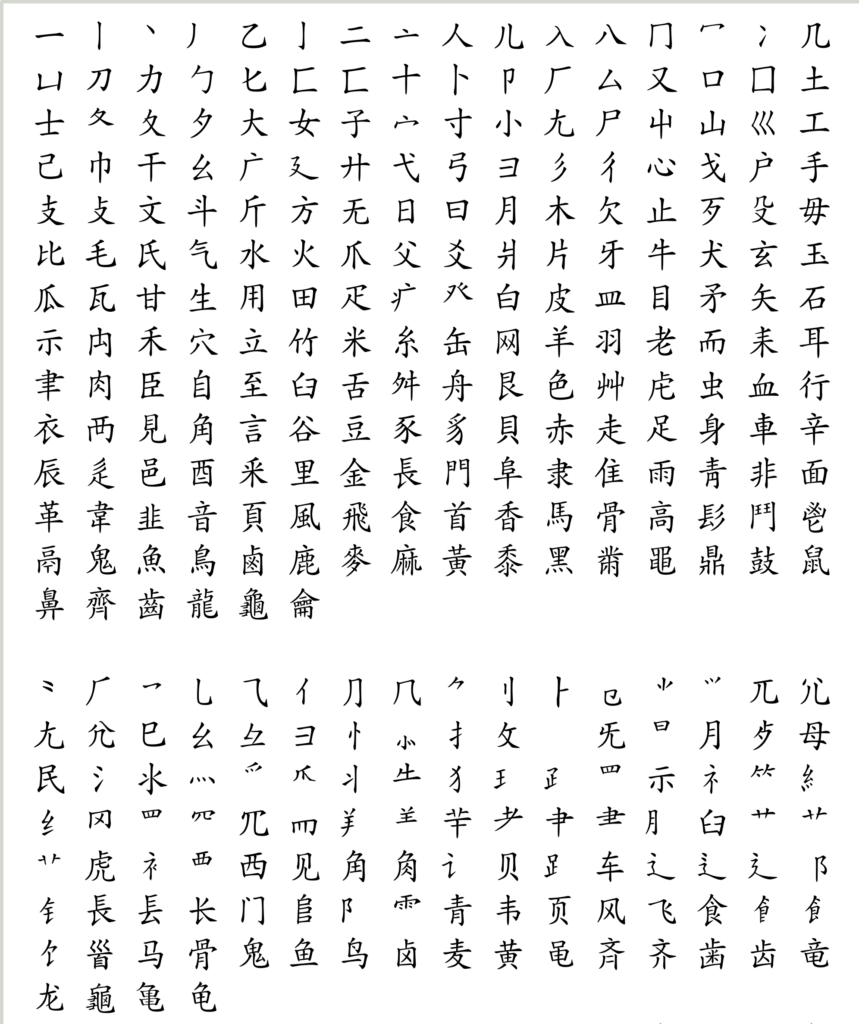 Unless you’re looking up a character in the dictionary, you don’t need to locate that radical. Instead, you can break up the main character into smaller radicals to help decipher its meaning. Keep in mind that some radicals appear as multiple ones due to their complexity, like 亀 (turtle), for instance.

You also write Chinese characters in blocks. In order to combine radicals and fit them into those blocks, some of them are modified. That’s why radicals may look different on the chart below from the characters you run into. Still, the similarity is there.

There is an important cultural element in these characters you shouldn’t forget. As mentioned before, culture and language are inextricably connected to one another. Learning a new language means learning ideas, history, and values of a new group of people. And you can use that to your advantage as you learn Chinese radicals.

A famous example is this one: 家 (jiā) meaning home. This character combines two radicals, 宀 (mián) that means roof and 豕 (shǐ), meaning pig. Pigs used to be kept in the home and meant that someone lived in the house. So, a home is really just a pig under a roof.

Below, you’ll find a comprehensive list of 214 Kangxi radicals used to help express meaning in these characters. Once you know how to read the hints hidden in each character, you’ll be able to rapidly increase your Chinese reading comprehension.

One way to help you learn Chinese radicals is to use mnemonics. These are visual representations, stories, rhymes, and other memory strategies to recall information. For a better idea of this at play, you should watch this video from Chineasy’s ShaoLan.

She does a wonderful job putting together mnemonics to help remember radicals:

Fun fact: Below you’ll find that the Chinese Radicals are not organized alphabetically. This is because Chinese is phonetic. Instead, you’ll see that they’re organized by the number of brush strokes. 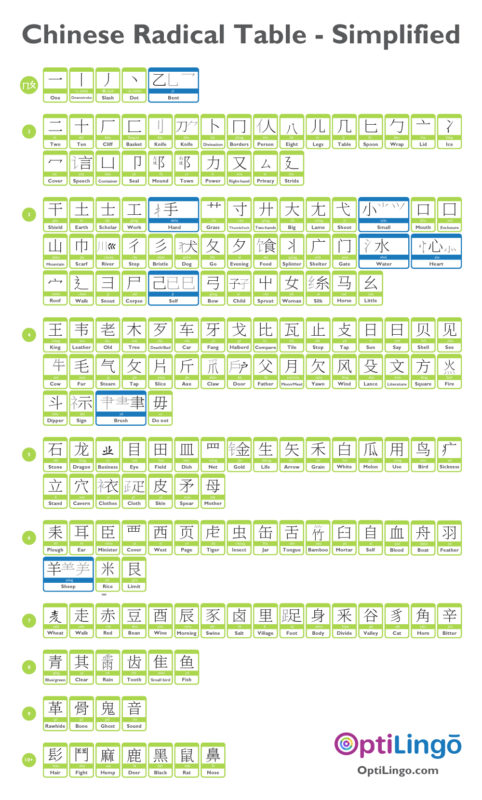 How Can I Learn Chinese Radicals Faster and Easier?

There are many more strategies to help you rapidly learn any new language, including Chinese. The key is to avoid dated-practices that could ruin your passion to learn a new language.  Boring drilling, memorization, and a heavy focus on grammar aren’t just a waste of time and money, they’ll keep you from being able to speak Chinese confidently.

If you want to learn a new language, then you need a platform that gets you SPEAKING, not typing in your new language. OptiLingo uses Guided Immersion and Spaced Repetition Systems to target the most useful, high-frequency words and phrases. For more information, check out OptiLingo today! 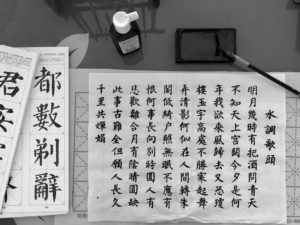 Everything About the Chinese Language 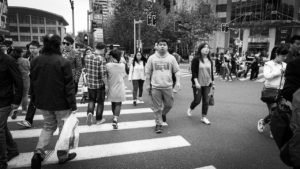 65 Essential Words and Phrases for Your First Chinese Trip